What is the Eden Alternative?

The Eden Alternative was founded in 1991 in the USA by Dr Bill Thomas and Jude Meyer-Thomas. It is based on the core belief that ageing should be a continued stage of development and growth, rather than a period of decline. The philosophy was originally applied to nursing homes but has since been adopted with little modification by all forms of residential care, community care and other long term care environments.

The Eden Alternative philosophy of care is strikingly simple. Regional Coordinators, Mentors and Eden Associates teach that people should live in positive environments, not sterile medical institutions. The philosophy is based on ten principles that have been developed to support the elimination of the plagues of Loneliness, Helplessness and Boredom that make life intolerable in so many of today's nursing and residential homes.

The Eden Alternative is about changing the culture of care. The departmentalised, task orientation of the institutional model has created a culture that is characterised by pessimism, cynicism and stinginess. By moving away from a top down bureaucratic approach to management and moving decision making closer to those living there Edenising organisations are helping to support a meaningful life for all those they care for and support.

The beauty of the Eden Alternative philosophy is its flexibility and adaptability. As it is a philosophy, and not a project or package that can be unwrapped and implemented, it can be and has been implemented in a wide range of cultural environments across the world (see Eden International) and increasingly in a wide variety of care situations. The philosophy has been particularly successful in organisations caring for people living with advanced dementia.

Studies show that implementation of the Eden Alternative philosophy is a powerful tool for improving quality of life and quality of care for those living in long term care. Organisations that have adopted Eden as an organisation-wide philosophy have found that there is improved staff satisfaction and retention and significant decreases in the use of medication. Most importantly the people in residence, supported by care givers, can once again direct their own daily lives. 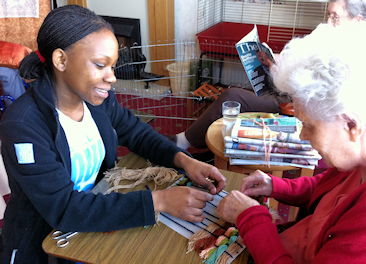